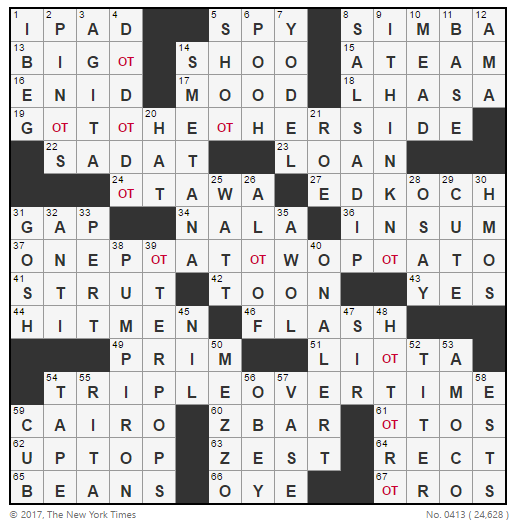 This puzzle went through many transformations (e.g., TRIPLE[OT] and even 3OT serving as possible revealers) before I settled on the final set of theme answers. Not too proud of ESTS, RECT and [OT]ROS congregating in the bottom right, but that corner was just a big bad bear to fill, even with an extra black square at the end of 51-Across. Overall, I’m pretty happy with how the rest of the puzzle turned out.

Will and Joel smoothed out the solve by tightening a lot of the clues, though I do wish some of my attempts at being cute also made it to print: “Barely show?” for FLASH, “Call it a knight?” for SIR and “Medium for a musician?” for MEZZO. Maybe next (over)time.

TRIPLE OVERTIMES = entries with three OT rebus squares apiece. There was something so pleasing about the OT x OT x OT alternation in DOT DOT DOT and HOT TO TROT. Very fun. 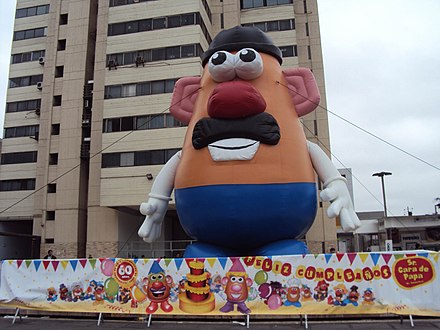 GOT TO THE OTHER SIDE … this one didn’t hit for me, as it felt like a truncated punchline. With four featured themers, it would have been great to get a little more zip to this one.

A bunch of nice bonus fill, PUMP IRON, SALSA DIP, I THINK NOT, OTTER POPS all excellent. I liked that those last two included some of the OT squares; a nice touch. Often, the crossing answers to rebus themers can be a bit neutral to dull (OTTOS or OTROS, e.g.) so I enjoy when a rebus constructor goes the extra mile to work in snazzy crossing answers.

I finished with an error, AMOCA / OTRAS instead of AMOCO / OTROS. Peeved me at first, but I think it’s probably fair — more my being careless than anything. OTRAS / OTROS is ambiguous, but AMOCO was a big company after all … and the CO = company should have been a dead giveaway. SHOOT!

Some blips in the short fill in IGOT OYE ESTS ZBAR (if I as a mechanical engineer struggles with this …), causing me some AGITA. Not unexpected given all the crossing themers.

The only place that I thought really suffered was the lower right, which Mike already called out. Not surprising given the TRIPLE OVERTIME / HOT TO TROT crossing causing so much inflexibility. ESTS / OTTOS / OTROS / AMOCO / RECT … oof. Perhaps moving the three black squares at the end of FLASH down one row would have helped, but that could have easily created more problems.

As a basketball fan, I liked the solve. Would have been nice to get an extra layer of a-ha, but I’m not sure what that could have been.